You can read more about this console on the artist’s website. You can see more of this artist’s work here.

I don’t know what this relic “Dream-Cast” is, but it makes a great canvas!

Crowdfunding Campaign Hopes to Enlighten Valve on What They... Crowdfunding Campaign Hopes to Enlighten Valve on What They Probably Already Know: We Want Half-Life 3

Two self-professed interns from Albuquerque, New Mexico, have launched a crowdfunding campaign on IndieGogo with the most noble mission statement imaginable: pester the shit out of Valve and its 300-some employees until they finish Half-Life 3.

The two superfans have set a $150,000 goal to accomplish the dream of strong-arming a developer into sequelizing a franchise that hasn’t made a peep since 2007. How they intend to do that, to put it lightly, is rather drastic. To put it how I want to; it’s borderline obsessive.

Hitting certain pledge goals on the march to $150K puts into motion several stages of the duo’s plans. The first road mark, at $3000, enacts an AdWord measure where, contingent on how vain they are, Googling a Valve employee’s name will greet said Googler with an ad stating: “WE WANT HALF-LIFE 3.” It’s to the point and terrifically creepy. Excellent.

Moving on to $9000 allows the group to slap their Half-Life propaganda on a mobile billboard (like on the truck above). The trucks will then ride the streets of Bellevue, Washington — home to Valve headquarters — until the developer’s “white flag is raised.” Or, until they can longer afford to demean a truck driver that much in a single day.

Now any good womanizer worth the palm-shaped rash on their face will tell you, “persistence is key,” and by Joe, these boys have persistence in stride. $45,000 of your dollars unleashes the Gabe Brigade — that is, a small horde of Gabe Newell look-a-likes “besieging Valve’s doorstep wearing ‘We Want HL3’ t-shirts.” Hard to imagine, right? Here’s a visual aid: 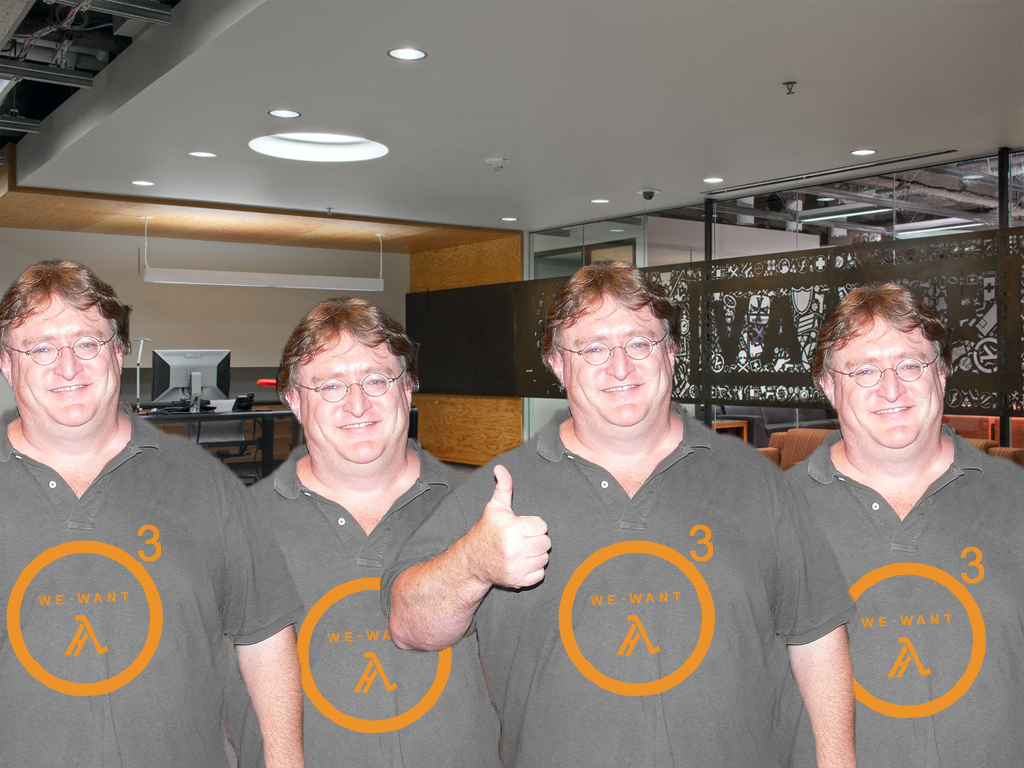 “Who knows,” reads the campaign page. “Maybe they will sneak into a strategic meeting and release Half-Life 3 themselves.” They’re making it sound like these paid-for, middle-aged actors will be absolutely out of control. They’ll be hanging from the rafters and raiding the company lounge for Twizzlers. It’ll be like Gremlins but with fat guys. Actually, now I’m all about funding this campaign.

But, surprisingly, the most expensive goal the group set is also the tamest — they want to throw a concert. “We’ll pack a venue in Seattle with all of the Half-Life fans that can make it and throw the biggest Half-Life concert possible. With some of the biggest names in video game music.”

That…that sounds completely reasonable. And this is coming from a group that intends on swarming a corporate office with nerd-a-likes until the employees either cave in or start picking the impersonators off in a real life Left 4 Dead scenario. More so, the duo wants to invite everyone from Valve to attend the concert and to have them hear/suffer first-hand just how badly the fans ache for a third round of Mute Physicist Battles Inter-Dimensional Aliens.

But you know what? Put your wallets away, folks. If your intention is to loudly state that you want Half-Life 3, I have news for you: the message has been received loud and clear. For years now. Valve knows you want it. They’ve known since the global aneurysm gamers had when it became clear no Half-Life 2: Episode Three would swoop in and save us from the mental blue balls Episode Two’s cliffhanger gave us.

Half-Life 2, ten years out from its initial release, is still considered a crowning achievement in virtual storytelling. A milestone that sits in a club with very, very few peers. That’s a shit ton of pressure. Imagine if Half-Life 3 came out and it sucked? It’d be another ten fucking years before people stopped bitching.

It’s not about ignoring your vitriolic demands (or your AdWords, should that come to pass). It’s about getting it right. It’s about doing the legacy of this franchise justice. (It’s also somewhat about the fact they really don’t need to make a game ever again thanks to this, but that just takes the oomph out of my point).